Railroad signals, much like traffic signals guide and protect the steel rails and the people working around them every day (and night). This is a collection of these various signals, taken when they are most observant… at night. 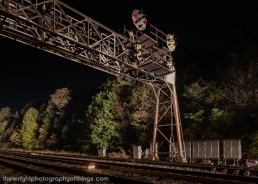 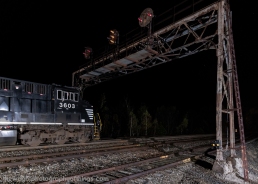 The former Baltimore and Ohio Valley Line, from Harpers Ferry to Strasburg passes along the floor of the Shenandoah. In Charles Town the line crosses the former Norfolk and Western at grade and is protected by CPL signals on all sides. On this night a westbound grain train for Winchester approaches the crossing and illuminates the air and silhouettes the trees and signal in its waning days of service. The signal pictured is historically operated and maintained by the N&W and NS, who used Union Switch & Signal appliances (as opposed to B&O’s “General Railway Signal” wares. These are probably the last surviving examples of US&S ‘Color Position Light’ signals in the USA (Washington Union Terminal Co. still had a few). They replaced lower-quadrant semaphore signals here as early as the 1920s.

H28.1 Norfolk Southern Allentown, PA to Birmingham, AL manifest train 15T helps create this scene at Charles Town, WV on the former Norfolk and Western Valley Line that will soon be altered. The Color Position Light Signal will soon be replaced and perhaps along with it, the code line you see to the right as NS readies the railroad for PTC implementation and signal upgrades.

The ‘Charles Town Crossing’ (Ranson) was historically operated and maintained by the N&W, who used Union Switch & Signal appliances (as opposed to B&O’s “General Railway Signal” wares. Long story short, these are probably the last surviving examples of US&S ‘Color Position Light’ signals in the USA (so, anywhere? – Washington Union Terminal Co. still had a few). They replaced lower-quadrant semaphore signals here as early as the 1920s 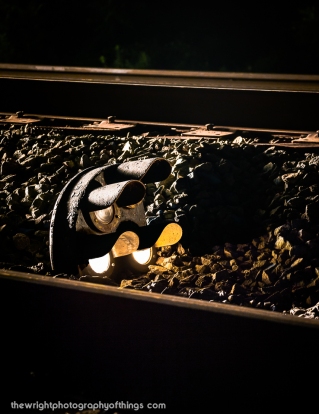 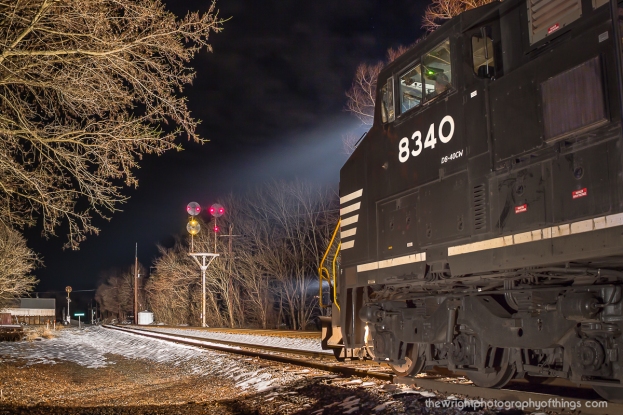 H40.0 The lit signals at Berryville are set against a full moon.

LIT UP LIKE DAYLIGHT: Q370 rolls under the B&O Color Position Light Signal Bridge at Great Cacapon, WV on Friday January 6, 2012. Thanks to Sean Hoyden for letting me have a try at this using his equipment

The signals at Dickerson, MD on the CSX Metropolitan Sub early on Sunday, Sept 24, 2017.

An eastbound manifest turns the corner around the curve on the PRR mainline through Mapleton, PA as it turns out, an empty hopper train enters the westbound block at Jacks and activates the 193W signals.

The PRR Position Light Signals at Lilly, PA overnight in October, 2017 as the light from an approaching eastbound pierces through the night air and stars slowly fade. Of note is the contraption to the left center of an old pulley system used by the PRR to allow water to the locomotives since Lilly was a water stop and full interlocking on the West Slope. 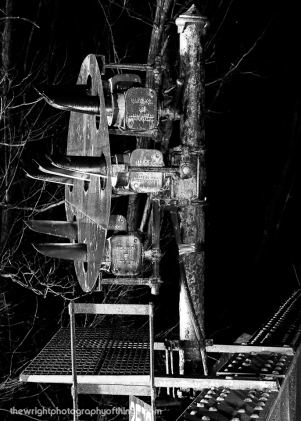 With a coal train stopped at CP GRAY. an eastbound intermodal approaches the PRR signals at Tipton, PA. Why was the coal train important? Because it was still in the block and kept the westbound signals lit. 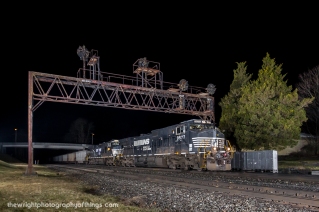 A loaded Norfolk Southern coal train 590 destined for the port of Baltimore passes under this classic Pennsylvania Railroad signal bridge at Summerhill, PA just after midnight on February 20, 2017. 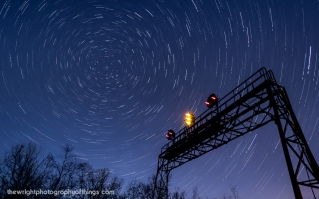 SIGNAL TO THE STARS Twenty-Seven and a half minutes elapse in this collection of four shots layered together as the Pennsy signal bridge at AR (Allegheny Range) stands tall against the backdrop of the swirling night sky and the North Star. This signal stands close to the Pennsylvania Railroad’s summit across the Eastern Continental Divide 2,167 feet above sea level and lets eastbound crews know half the journey over the mountains is complete before they enter Portage Tunnel and into “The Slide” and down the mountain. 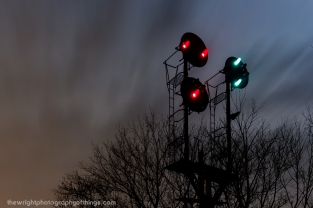 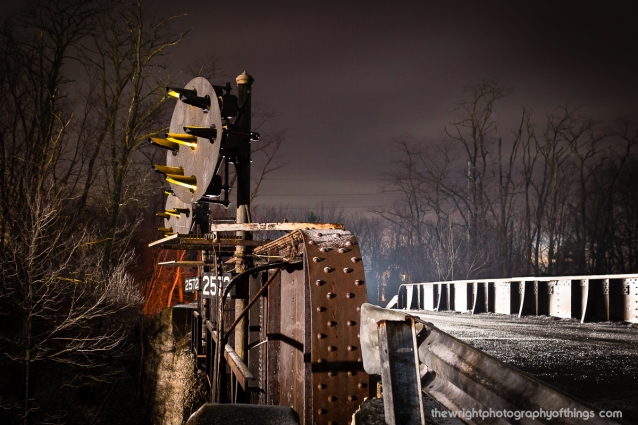 H16.8 ROJO EL COLOR DEL AMOR: SHEPHERDSTOWN, WV, My Spanish may be rusty, but this old Norfolk & Western CPL signal sure is. The signal is accented by lighting provided by Sean Hoyden using 2 off camera flashes behind and to the right of me in this roughly 36 second exposure. 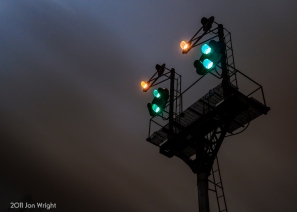 H40.0 These N&W CPL signals were replaced by Norfolk Southern in April 2012. 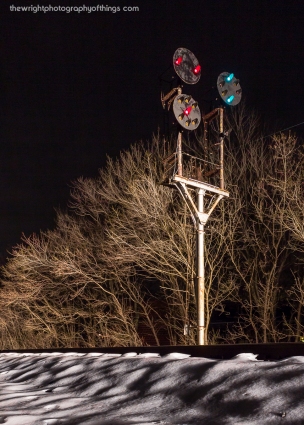 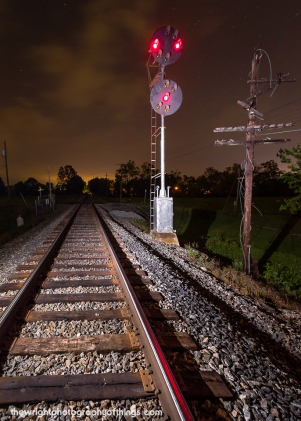 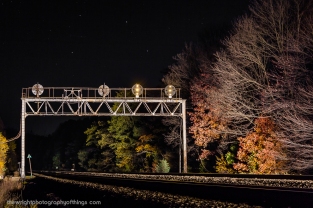 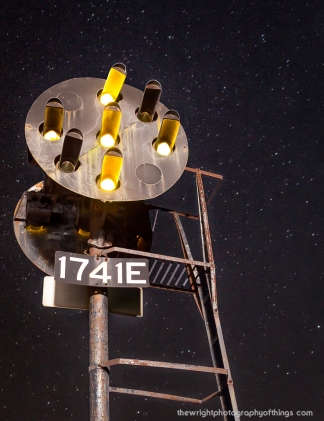 An eastbound reaches the Allegheny Summit at Gallitzin, PA with the former tower in the distance.

A northbound approaches the N&W signals at Shepherdstown as their replacements lay on the ground ready for installation as part of the PTC mandate. 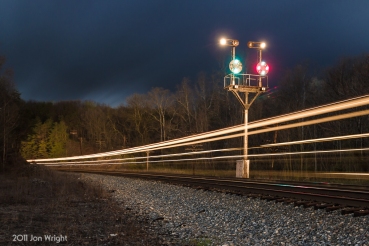 CAROTHERS STREAKING: A westbound lights up B&O in April, 2011

H40.0 DOWNTOWN BERRYVILLE: A southbound approaches downtown Berryville, VA. The signals were taken down 2 weeks after this photo was taken on Easter evening 2012.

MAGNOLIA RECONSTRUCTED: Looking east and the B&O CPL’s don’t have much time but in order to build a new crossover, the west bound signal mast will be removed in order to make room. Hence the replacement CPL’S on the modern masts.

H82.5 15T reaches the summit of the grade between Front Royal and Shenandoah, VA at “Summit”: where Vaughn Summit Road crosses just north of the interlocking for the siding. on Norfolk Southern’s H Line in the Shenandoah Valley. 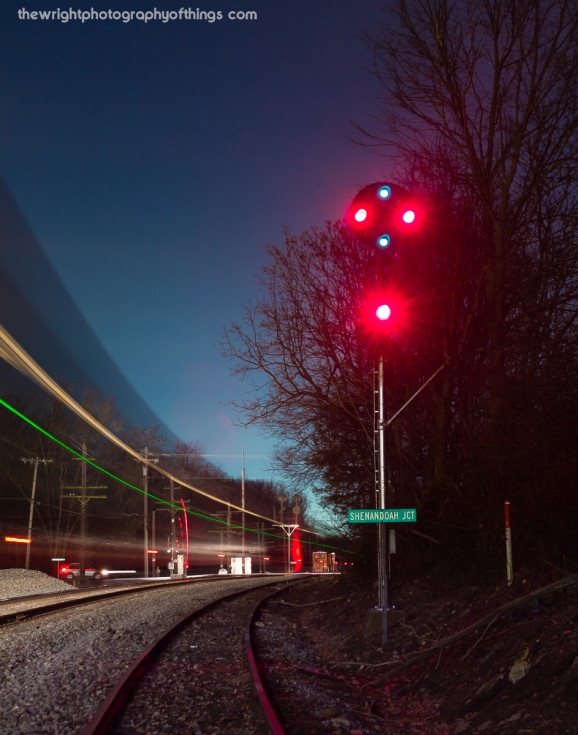 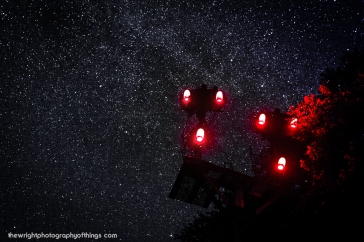 CANNON’S NIGHT LIGHTS: Standing guard on the former Pennsylvania Railroad Pittsburgh Line west of Harrisburg is this signal bridge at Duncannon. An eastbound approaches on track 2 as a westbound, on track 1 awaits to continue on and activates the position light signals. 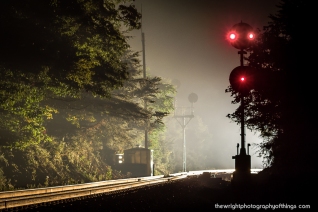 END OF AN ERA: The Capitol Limited has been a fixture on this line minus 10 years since 1923. Also a fixture on this former Baltimore and Ohio Railroad mainline are it’s color position signals. This week marks the end of an era for the Cumberland Sub as these signals come down. These long standing symbols of railroading will no longer carry the call of “Amtrak 29, west on one (or in this case two), clear Dry Wall.”

SOMETHING DIFFERENT: westbound empty hoppers lit up under the Dry Wall signals. Totally by accident as the red is from the tail lights of a truck and the blue from the led lantern I used. 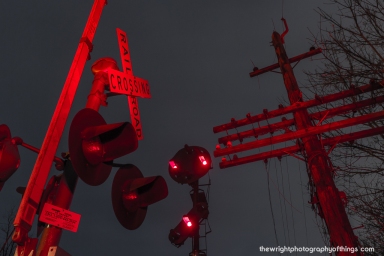 H82.5 A night time variation of a photo previously taken. Using my head lamp for accentuation. 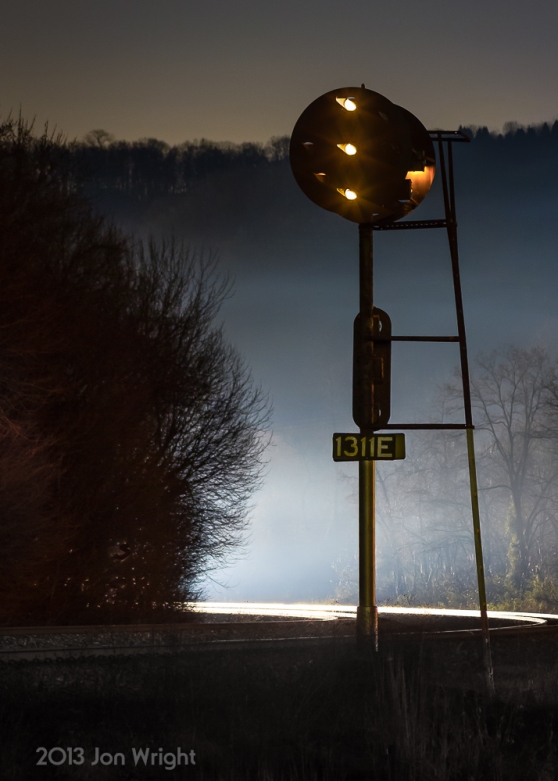 FOGGY CLEARANCE: A quiet night along Norfolk Southern’s Middle Division of the Pittsburgh Line is on break as an eastbound approaches the block from the west and lights up the PRR position Light signals and a westbound intermodal train prepares to round the curve illuminating the fog and tracks ahead silhouetting the mast signal.

PAW PAW, WV: The west portal of Carothers Tunnel sits in the distance and an east bound train streaks by in this long exposure taken in the roughly 2 minutes it took for the train to pass as you see it’s end of train device flash.

H22.7 A Southbound on the H Line approaches the N&W CPL signals as a vehicle passes on an adjacent road lighting up the B&O interchange tracks in the foreground. 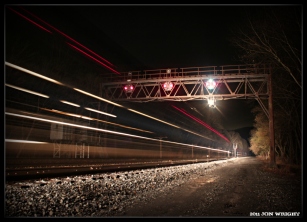 These NY style signals on the former Conrail Lurgan Branch stood until June of 2013. The Moon sets in the distance as an oncoming train approaches.

H16.8 The Norfolk and Western CPL at Shepherdstown, WV displays a clear indication for Norfolk Southern train 15T on the railroad’s H Line. The constellation “Orion” can be seen to the right.

H73.4 ACORN HILL AT DUSK: The peaks of Massanutten Mountain loom behind the N&W color position light signals that guard the interlocking at the south end of the Bentonville siding in the Shenandoah Valley of Virginia. 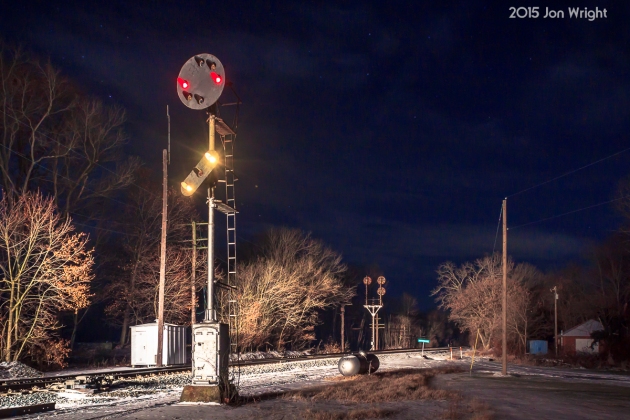 H22.7 NW CPL @ SHENANDOAH JUNCTION, WV: The N&W CPL Mast stands guard over the former’s now Norfolk Southern H Line. Time is running out for this and its sister dual bracket mast Seen here as NS is actively working on extending the siding to the South and install new interlocking at both Daniels and here over the course of the next few months. 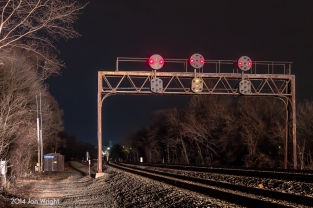 YOU LIGHT UP MY NIGHT: A westbound rounds the curve and illuminates the PRR Signal bridge at Duncannon, PA as it enters the old PRR Middle Division to Altoona and Pittsburgh and other points west. The Top Head displays the “snake Eyes” initally installed in the 1950’s. The bottom head shows the clear indication but unknown to the eye, during this 17 second exposure, the signal was flashing. 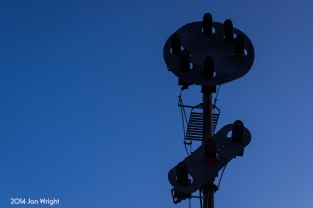 SUMMIT: Silhouetted against the dusk sky is the single mast N&W CPL at Summit.

H16.8 It’s a very chilly 10 degrees at Shepherdstown, WV as 213 sits in the siding to meet the oncoming 12R. The venerable Norfolk and Western CPL signals stand guard both in the foreground and distance and have observed meetings like this many times since their initial installation on the H Line in 1923. Until the late 1950’s, the lenses were all amber in color *much like the PRR PLS* but were converted to the color lenses you see today. 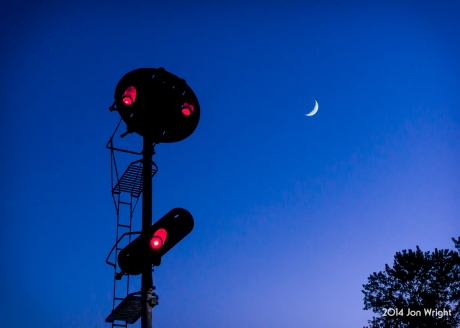 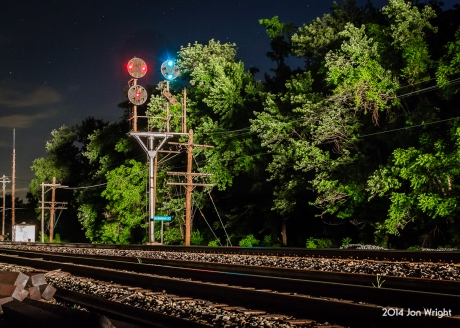 H22.7 SHINE ON YOU CRAZY DIAMOND: These signals and their sister single mast for southbound movements are not long for this world as their replacements sit 8 miles south ready to be installed. The Norfolk and Western Color Position Light northbound bracket mast signals stand tall as oncoming NS train 36Q lights up the scene and has the clear indication to proceed north. 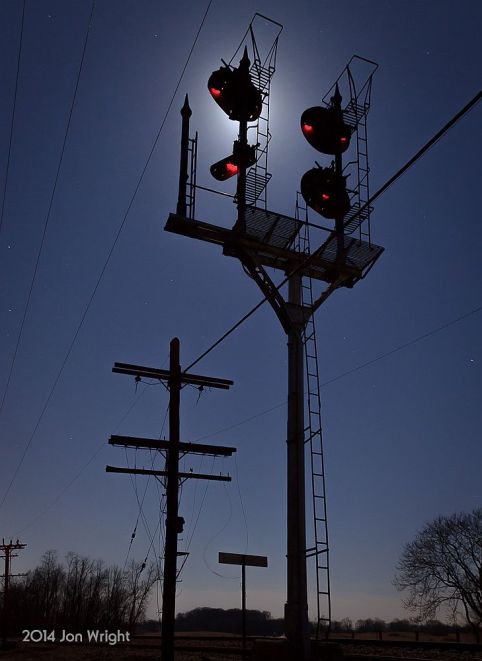 H22.7 The N&W Shenandoah Junction CPL Signal Bracket Mast and code line pole is silhouetted against overnight sky lit up by the Full Moon of March 2014. 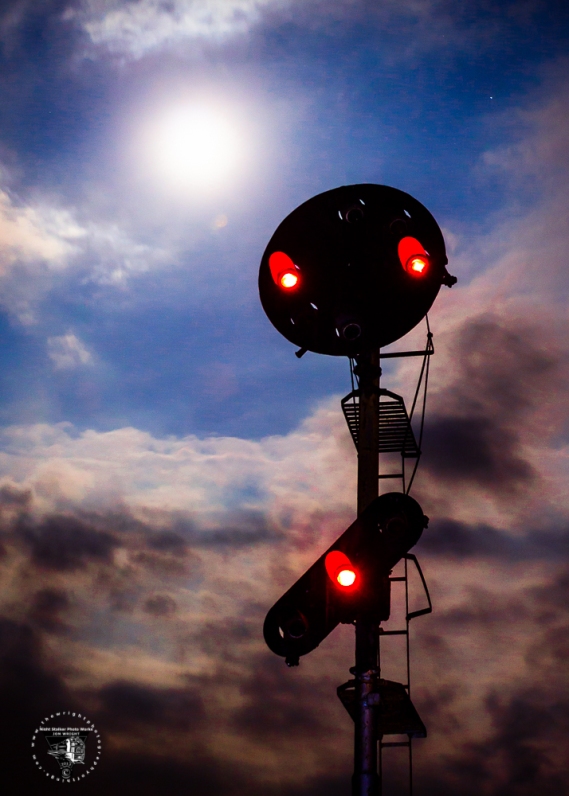 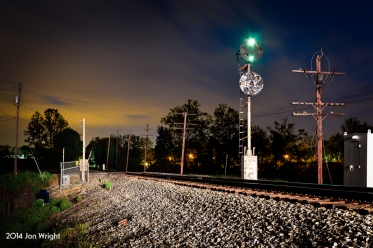 H27.9 CLEAR CHARLES TOWN: Protecting the CSX/NS diamond is this classic N&W CPL signal as a northbound NS train illuminates it and the right of way ahead in this 2 minute exposure.

LAST GREEN OF WB: A “what if?” MARC P883 was due into Brunswick a little bit before 2030 hours on Friday December 9th 2011. CSX had the signal suspension called for 2045 hours. At about 2015 hours the high green appeared on the WB CPL signal by the Tower, giving its last aspect of its life. For whatever reason P883 sat at East Brunswick for about 45 minutes and in doing so ran into the suspension. At about 2110 hours, the aspect changed from green to red as all the switches in the yard were taken off power and into hand throw. History had been changed but P883 had not shown. Finally at about 2125 hours, the train arrives. Using multiple layers This is what should have been as P883 rolled by marking the end of the cpls watch.