A collection of photos taken of a short line based out of Union Bridge, MD and runs primarily on the former Western Maryland Railway mainline from just west of Baltimore to Highfield, MD. The line was purchased by Genessee and Wyoming, Inc., a holding company of short lines in 2008. In early 2014, the classic blue and orange paint scheme beloved by many fell victim to the G&W yellow, orange and black corporate colors. The MMID also had a lovely fleet of GP38-3’s but since, only 2 remain and 4 rebuilt SD40-2’s have taken over the majority of operation. 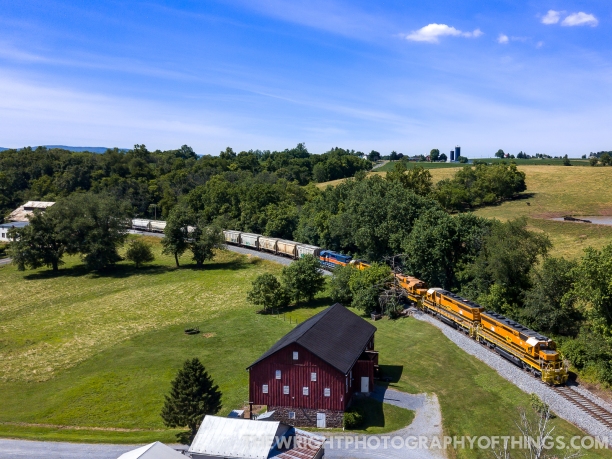 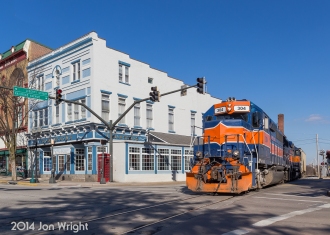 Returning to the yard in Union Bridge from Keymar is UBYS, the local yard switcher that was the only daylight move on the MMID this day. The short push/pull train is passing by the former Western Maryland Railway station which is now home to the Western Maryland Historical Society. The blue and orange will soon be replaced with the G&W black and orange and upgraded power of 4 SD-40′-2s but in SD45 car bodies. 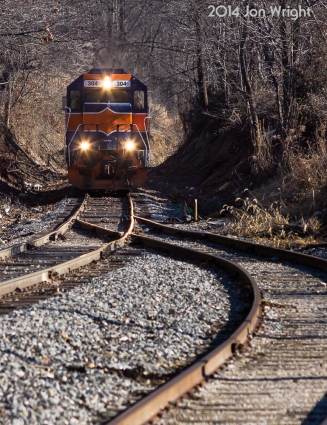 REISTERSTOWN SIDING: I decided to have some fun while the gang I was chasing with ate lunch. This is the train after picking up from CSX with only 1 car. Shot from Reisterstown Lumber looking east. 1/16/14

UBYS KEYMAR: Shortline railroading at its best. Having never shot the MMID before a couple friends and I set out to chase it’s run from Union Bridge to Highfield. However, we found out that that run would not happen until just about dark but a yard crew was headed west to switch the local fertilizer plant at Keymar. Here it is at KFI as 304 is spotting cars onto the siding as 302 holds the former Penn Central main that ran through Taneytown, MD, Hanover and York, PA. This was the only daylight move of the day. The blue and orange will soon be replaced with the G&W black and orange and upgraded power of 4 SD-40′-2s but in SD45 car bodies. 1/8/14 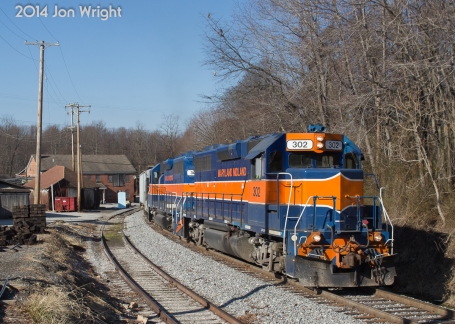 REISTERSTOWN LUMBER: eastbound UBEG rounds the curve at Reisterstown Lumber on its way to Emory Grove. 1/16/14

EMORY GROVE: ARRIVING WITH A 15 CAR TRAIN, THE UBEG WILL INTERCHANGE WITH CSX AND PICK UP ONE CAR TO TAKE BACK WEST. 1/16/14 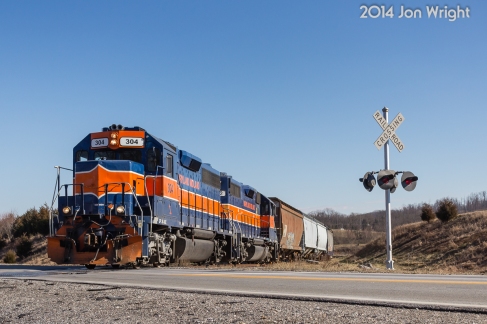 1902 STATION: Housing the Western Maryland Railway Historical Society is this former WM Station in “downtown” Union Bridge. Across the street is the MMID home office and yard where railroad operations originate for their daily runs. This is UBEG switching cars into the yard from it’s trip east in preparation for its trip west to Keymar.

UBEG FINKSBURG: Passing by the Barrick Quarry terminal on its way to Emory Grove. 1/16/14

INTO THE SUN: The Maryland Midland Highfield turn continues west toward Thurmont after dropping off a flatcar at Keymar as the Sun rises to the East 90 minutes after daybreak on this cold and bright Winter morning. 1/24/14

MEDFORD STATION: The UBEG train picks up the cuts of cars out of storage and heads west back to Union Bridge. 1/16/14

UNION BRIDGE STATION: Under the overhang of the old WM Station, MMID 304 awaits its next orders after arriving from Emory Grove. 1/16/14 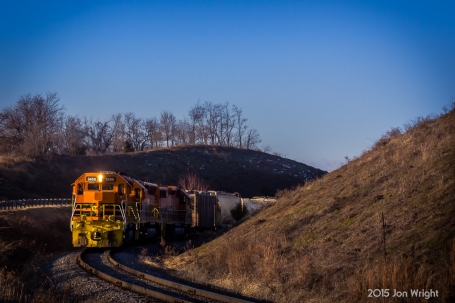 AROUND THE BEND: MMID 3450 3448 and 2601 push 20 empties hoppers to the Lehigh Portland Cement Plant alongside Shepherd’s Mill Road an hour after sunrise. 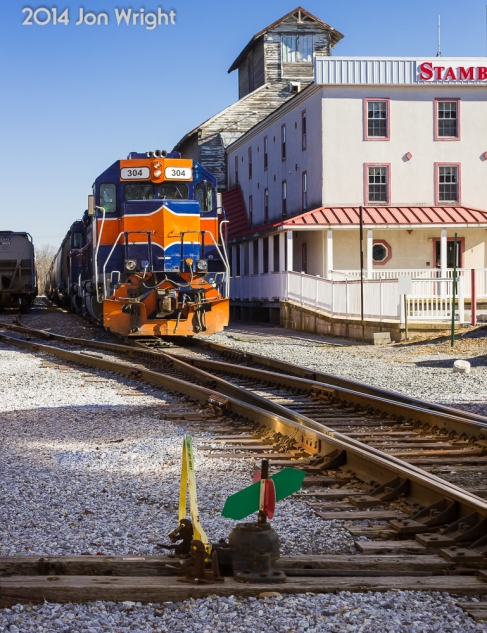 HOSPITAL TRACK: After arriving in Union Bridge from Emory Grove (Glyndon, MD) the train pulled ahead to allow space to reverse onto the Hospital Track (for which the switch in the foreground allows access) to store covered hoppers it picked up at New Windsor. After it finishing the move, the train then reversed on the main in front of the MMID office to await orders before heading west to Keymar. The hospital track earned it’s name during the Civil War and was where cars were parked to transport wounded Union Soldiers from the battle of Gettysburg. Union Bridge was at the time of the battle, the western terminus of the Western Maryland Railway. 1/16/14 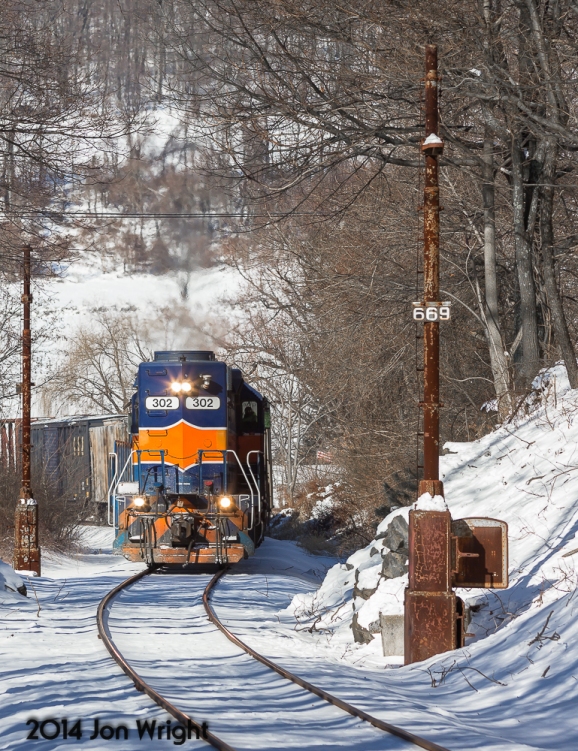 BENTZEL ROAD: Many relics of the former Western Maryland remain along the former Baltimore mainline. These signal masts for one stand at the western leg of the Catoctin Horseshoe Curve at the former grade crossing of Bentzel Road. The heads were in place until at least 1998. Along the line you can find other masts, pole lines and other artifacts that seem to be left and forgotten about. 1/24/14

LANTZ: Rolling down the mountain after making its drop off and pick up from CSX, MMID’s UBHF rolls by the tiny mountain hamlet known as Deerfield Station during the Western Maryland Railway days but today is simply known as Lantz. 1/24/14

MOUNTAIN RAILROAD: The original logo for the MMID was a diamond with MM interlaced with each other to represent the Mountains and Valleys it traversed. No better example of this is the segment of line from Thurmont to Highfield where the railroad follows Owens Creek to Sabillasville. Here at the small hamlet of Lantz, the rails leave the gorge and begin it’s heavy pull to the top.

MIDDLEBURG, MD: AFTER CUTTING OF CARS IN UNION BRIDGE, UBEG GETS ORDERS TO HEAD WEST TO KEYMAR AND ONTO THE MDOT LINE AND SWITCH OUT CARS AT KFI 1/16/14 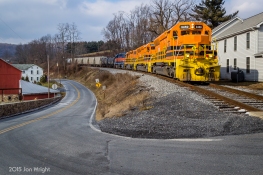 LANTZ RETURN: Another fortunate sunspot greets the downhill UBHF at Lantz. Leading the train is an SD40-2 rebuild, new to the MMID since the Fall of 2014.

CATOCTIN CURVE: The steepest stretch of the grade between Thurmont and Highfield is here in a mile long horseshoe curve. UBHF is returning from Highfield and the screech of the brakes and steel wheels coming down hill can be heard for miles. 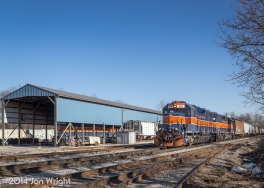 THE ENGINE SHED: PASSING THROUGH THE YARD, UBEG PASSES THE ENGINE SHED HOUSING MMID 303 STILL SHOWING HER BLUE AND ORANGE… FOR NOW. 1/16/14

SWITCHING AROUND: After returning to Union Bridge from it’s normal run to Emory Grove and back and picking up some grain hoppers out of storage at New Windsor along the way, the crew switches at KFI off the MDOT line at Keymar. The car is in the foreground will be picked up and taken back with the train to Union Bridge. 01/16/14

FLINT RETURN: UBHF coasts down the mountain at Flint, MD. 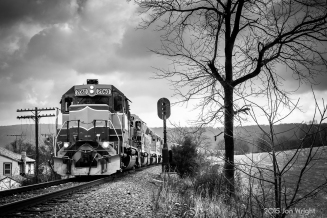 REMNANTS OF A RAILWAY’S PAST 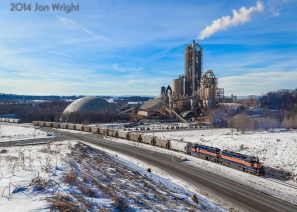 LEHIGH CATHEDRAL: It’s a balmy 14 degrees with a stiff breeze blowing as the UBTT (Union Bridge–Taneytown), brings out a set of hoppers from the Lehigh Portland Cement Plant in Union Bridge on January 24, 2014. MMID 303 makes its last appearance in the blue and orange and within days, the engine would be sanded down and repainted into the Genesee & Wyoming black, orange, and yellow scheme as CORP (Central Oregon & Pacific Railroad) 2063, where the unit will be sent once its replacement arrives. This scene was captured from atop a cut that was made when the railroad built a new spur into the plant. The spur, which opened in 2007, eliminated the famous street running along Farquhar Street in town.The street running down Fauquier Street ceased in 2007 but the new spur offers this vantage point. My shoes are frozen and my toes are on the edge of being frostbite. I guess the hot warmers can only do so much… 1/24/14

THURMONT: Thurmont was a major shipping stop on the old Western Maryland Railway. Furnaces, logging operations and orchards from around the region used the rails to send out their goods. Today’s MMID UBHF has special guest 2060 leading with doing the honors. The engine, one of the GP38s, was left at the MMID and given a fresh coat of blue and orange with “MMID PRIDE” stenciled under the cab. 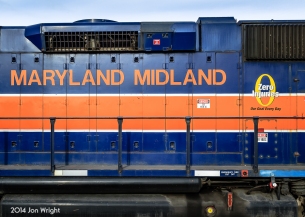 HIGHFIELD INTERCHANGE: After pulling onto CSX trackage, UBHF reverses onto the siding to drop off its train at Highfield.

WAITING ON A TRAIN

NEW WINDSOR, MD: Just how the times are changing in rural towns, where farm lands were abound and plentiful. They now back up to housing developments. Change also occurs as steadfast on the railroad. Soon these blue and orange geeps will be replaced by G&W standard orange and black within the next couple months. A sign of the times i guess. This is UBEG heading back to Union Bridge near New Windsor. 1/16/14