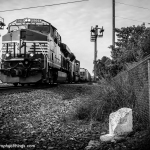 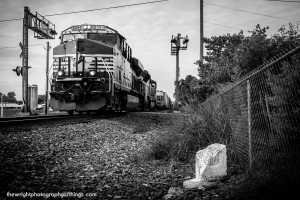 There is perhaps no boundary in the Continental United States that has been more influential in the history of the country than that of the West Line, otherwise known as the Mason – Dixon Line. It evolved around territory disputes between the Penn’s and Calvert’s in forming the colonies of Pennsylvania and Maryland. Blood had been shed before both colonies finally settled and allowed Jeremiah Dixon and Charles Mason to determine the actual boundary demarcation between 1763 to 1767.

Nearly a century later, the boundary became the dividing point between the Union and Confederacy during the Civil War. Although Maryland stayed within the Union, it was due to political wrangling and in many cases martial law.

Which brings us to Stone 108 between miles 104 and 105, it lies within the right of way of the former Cumberland Valley Railroad. The stone itself was not placed here by the original surveyors but is found to be an original stone, one of roughly 135 remaining along the roughly 230 mile boundary all quarried and shipped from England. The stone was perhaps moved from its original location some .33 miles away where sometime before 1902 the railroad found being used as a “horse block” by a local. The stone was set in a base of concrete as instructed by a surveyor working for the State of MD along the line. Sometime in the 1970’s a gravel truck was struck by an oncoming southbound train and damaged the stone.

Today, it remains as a visual reminder of this country’s history and serves as monument for generations to come. JW